With nearly 150,000 homes under management, Places for People is one of the largest players in the UK housing sector. Ranking in tenth place, it was also the highest placed large organisation.

Places for People is comprised of 19 separate operating companies that provide a broad range of services, from property management and care to building and running leisure centres. It’s a big ship, in other words. But the organisation doesn’t let its size get in the way. Its results shows a business considerably outperforming the sector average, let alone the UK economy’s norm, in terms of an innovation-friendly culture.

Stress levels among staff appear to be relatively low, while new ideas are encouraged and supported. Places for People also scores well on commitment - defined by Dolphin Index as the extent to which employees are committed to their organisation, as well as how engaging and stimulating they find their work.

So how can a large organisation remain responsive and open to new ways of doing things, rather than necessarily becoming slow and unwieldy? After all, the larger the ship, the longer it takes to change course. 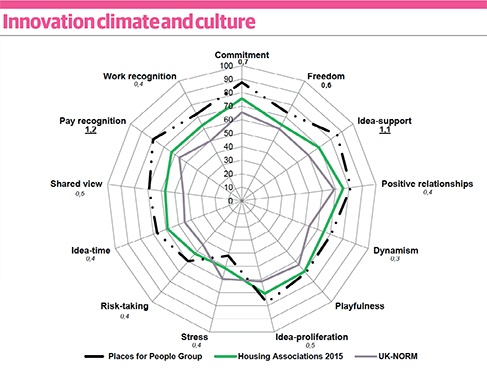 “If we had one great amorphous behemoth, it might be a problem,” says David Cowans, chief executive of Places for People. “But we’re not like that. We deliberately maintain our businesses with separate managements to avoid the organisational sclerosis that can accompany size. There is no attempt to force corporatism on them.”

Innovation is one of the business’ key values, Mr Cowans adds. “It’s at the core of what we do. It’s not about seeing what other people are doing, it’s about spotting trends and staying ahead of the game. But it has to be innovation that is practical and that works, and that can be commercially viable.”

For example, Places for People has set up a chain of nurseries, it pioneered market rent in the sector, and developed one of the first direct-lending schemes for tenants.

Each was first mooted in one of the yearly business plans, developed with input from frontline staff, that the management of each of the organisation’s 19 operating companies must submit each year.

“Innovation is about market analysis – really listening to what consumers are telling us, and then gradually, and in a risk-aware way, developing the wherewithal to cope with that,” Mr Cowans says.