Inside Housing worked with research partners at the Dolphin Index to study the organisational cultures of UK social andlords as oart of our Innovation Index project. Dolphin found that RHP was not only the most innovative organisation surveyed in the housing sector – it’s an outlier compared to just about anyone.

Innovation, visualised in the form of a Dolphin Index spidergram (below), looks like Pac-Man facing south-west. High scores on almost every metric create a plump circle with the exception of stress, where a high-performing organisation’s score will plummet sharply inwards.

RHP, which manages around 10,000 properties in west London and was placed first in the Innovation Index ranking, is the perfect example. 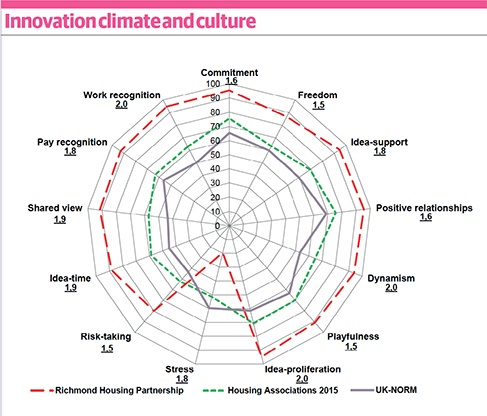 “I don’t think I’ve seen anything like this before,” says Mark Brown, chief executive of Dolphin Index. “There must be something in the water. It may be a very young organisation, a small organisation, but there is something very unusual and great going on there.”

RHP’s culture has not gone unnoticed. “Microsoft came to film us a couple of years ago because they thought we had a pioneering and innovative approach to online solutions,” says Amina Graham, executive director of corporate services at RHP. “We featured in their conference in San Francisco.”

What does Ms Graham think that is? “Innovation has to start with employees feeling confident and trusted,” she says. “If they feel they are trusted to do the right thing, if they are given the technology and skills to do it, and the freedom to act, I think that’s where the real magic lies.”

Three years ago, RHP went through a programme of cultural change. “Involving people in what that future should be was absolutely paramount in helping them go through it,” says Ms Graham. And what the resulting cultural shift meant, for staff at least, was more space and freedom in which to do their jobs and make their own decisions. 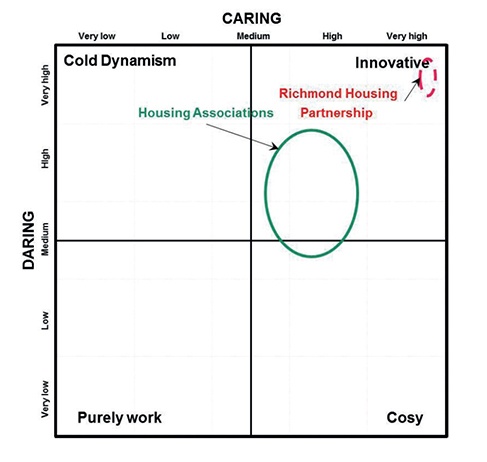 The result, as the spidergram suggests, is a workforce that is not institutionalised or hidebound; rather, as Ms Graham puts it, staff are encouraged to question and challenge the way things are done. Given that trust and space, innovation has room to flourish.

The workplace itself has been transformed with the same aims in mind. RHP’s forest and lakeside-themed meeting rooms, conservatory and music studio might cause a few eye-rolls among cynics, but they are an important part of the picture, says Ms Graham.

“Innovation isn’t a choice, it’s a business imperative,” she says. “And with all these challenges the sector is facing, the ability to be agile, responsive and open-minded are going to be the skills that make the difference between excellence and mediocrity.”